Why Kindergarteners Consistently Outperform CEOs on this Challenge

Have you heard of the Marshmallow Challenge? It’s a simple team-building exercise involving dry spaghetti, tape, string and one marshmallow. The task is simple too: who can build the tallest tower using only these tools? Oh, and the marshmallow has to go on the top. 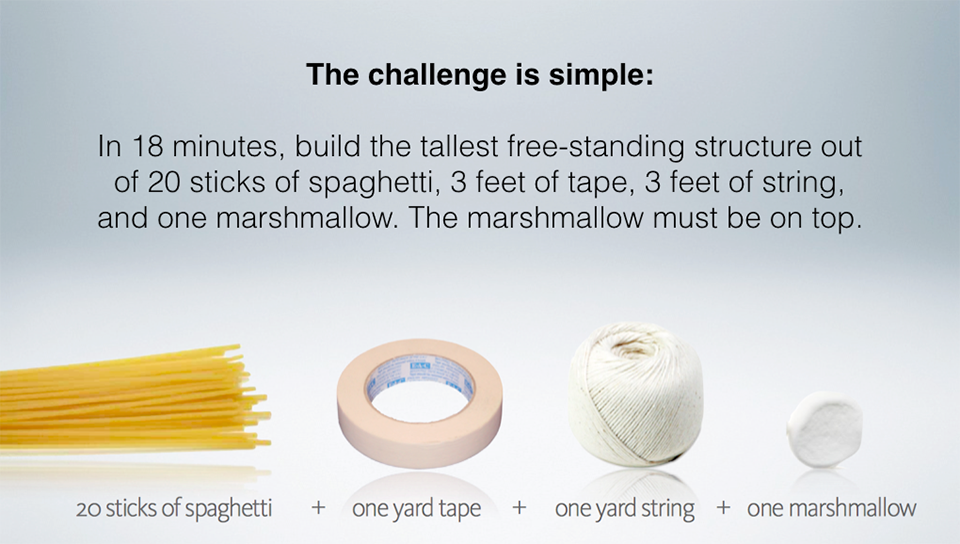 Peter Skillman from TED originally developed this design challenge, but most recently, Tom Wujec, a fellow TED Talks speaker, business visualization specialist and Fellow at Autodesk, ran this challenge in 70 workshops around the world. His participants included: recent MBA graduates, designers, architects, and members of the C-suite from Fortune 50 companies, to name a few.

During these workshops, Tom discovered that one group consistently outperformed all others on this challenge: recent graduates of kindergarten! Their structures were always by far, the most creative and the tallest.

So the burning questions of course, are why? How can this be? And you are not alone in asking these questions. Tom’s TED Talks video exploring this notion has already garnered over 2.6 million views.

This marshmallow problem brings to light some surprisingly deep insight into team building and collaboration – research that can have an important influence on our hiring practices. We can learn a lot about the “magic” of team dynamics and its effect on business performance – through the lens of this challenge.

First, let’s look at where most people go wrong on this challenge. Tom explains it in his TED Talks as follows:

“Normally, most people begin by orienting themselves to the task. They talk about it, figure out what it’s going to look like, they jockey for power. Then they spend some time planning, organizing, they sketch and they lay out spaghetti. They spend the majority of their time assembling the sticks into ever-growing structures. And then finally, just as they’re running out of time, someone takes out the marshmallow, and then they gingerly put it on top. Then they stand back, and — ta-da! — they admire their work. But what really happens, most of the time, is that the “ta-da” turns into an “uh-oh,” because the weight of the marshmallow causes the entire structure to buckle and to collapse.”

The worst performers tend to be recent graduates of business school. Tom hypothesizes that this may be due to the fact that these grads are trained to find one single path, to follow it and execute on it. Kindergarteners in contrast start with the marshmallow, and build successive prototypes – they build and fix along the way.

CEOs tend to perform only slightly better than the average adult, however – when CEOs are paired with executive administrators, they do significantly better! Again, Tom hypothesizes that this may be due to the fact that administrators have special facilitation skills. They focus on understanding the process and managing it.

Tom concludes that specialized skills and facilitation skills are the winning combination to succeeding in this challenge.

How many businesses today are set up to encourage employees to play in prototypes? We would venture to say, not that many unfortunately. Much of our business world is set up to make a hypothesis and follow it wholeheartedly.

So there are two key lessons that we think HR and hiring managers can take away from this Marshmallow Challenge:

To run your very own Marshmallow Challenge in your workplace, visit marshmallowchallenge for complete instructions and facilitation tips.