The beginning of 2012 marked a thought-provoking time for discussions on the future of our Canadian economy and society. In January, the Human Resources Professionals Association Annual Conference, themed “2012 and Beyond… Inventing the Future,” examined demographic, social and technological trends that will affect employees, work and organizations. 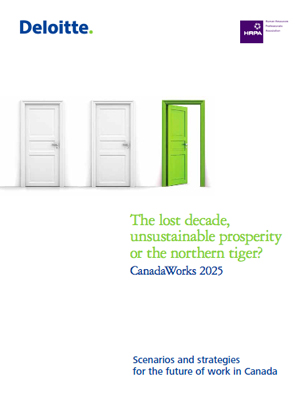 Most recently, Deloitte and the HRPA released, “CanadaWorks 2025,” an initiative outlining future scenarios for what the Canadian workplace might look like in 2025.* The scenarios were built through discussions with 50 notable academics, CEOs, ex-ministers and economists, and set the stage for a broader public debate on Canada’s economical competitiveness.

The scenarios are summarized in short below:

Overall, the most troubling scenario, ‘The Lost Decade,’ is the result of passive decisions. By 2025 Canada’s workplace will be struggling with issues relating to education, immigration and employment, and adaptation of new technologies.

This more positive scenario hopes that by 2025 Canada will have grown a steady GDP, and will contain highly skilled employees who have an optimal work/life balance. The main downfall however is that Canada will not have satisfying career opportunities for some sectors of the labor market, as a diverse education system is not present.

In this scenario, Canada will benefit from a vigorous and robust economy. Sustainable green technologies will be present, as well as a flexible education and legislation system. Also, the immigration system will profit the Canadian labour market.

While this report sparks debate on the potentially profound implications for retailers, operations, and executive teams, what does it mean to HR professionals?

Bill Greenlagh, the CEO of the HRPA says that “Canada’s success will depend on the creation of a diverse and sustainable economy built on human capital – an effective workforce that has the right people, with the right skills, in the right jobs.”

This directly relates to hiring and retention strategies, with a long-term vision for human capital planning since hiring decisions today will have a ripple effect on our work landscape tomorrow. Public and private dialogue must be in effect to collectively evaluate our hiring strategies and their future implications.

HR professionals recognize the importance of gaining strong human capital. CanadaWorks 2025 can be used as a tool to start a discussion with C-suites, in order to build continued value for strong HR planning and recruitment strategies. This initiative sheds light on how the HR sector’s decision-making can have a long-standing effect on Canada’s future.

What are your thoughts on where Canada is headed? Do you think we can become that Northern tiger? We’d love to hear what you think of this study.

* If you haven’t had time to read the full report, you may view the interactive presentation, to gain a broad overview on the debate.