How To Decode Body Language

The following article by Julie Labrie, president of BlueSky Personnel Solutions, was originally posted on Workopolis.

Research suggests that body language and paralinguistic cues (e.g. intonation, body posture, facial expression, etc.) influence up to 93 % of human communication, while only 7% is shaped by the words we use. Imagine the profound impact that non-verbal communication can have then, on the hiring and interviewing process. 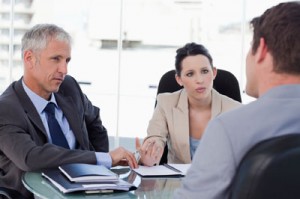 I interview more than 1,500 candidates each year both over the phone and in person. Each time, I instinctively take notice of people’s voice fluctuations, eye movements, how often they blink, whether their facial expressions match what they are saying, etc. But, what do these signs actually mean?

Today, there is an entire field dedicated to researching such “silent cues”, so I approached some of the industry’s most prominent thought-leaders to get their take on decoding a job candidate’s body language.

What you can learn from a glance

Eliot Hoppe, a highly respected authority on body language says that hiring managers, while they may not be conscious of it, already begin to “size up” a candidate for the position, at first glance.

And it’s literally a first glance. “In the first four seconds of meeting someone, you will have already answered four questions: 1) do I like you? 2) do I trust you? 3) are you safe? and 4) who do you remind me of?” said Hoppe. “Consider too, that even in a short 20-minute meeting, a person can transmit up to 700 non-verbal signals, and that’s beyond the verbal communication already taking place.”

There are some things hiring managers can keep in mind, and even pre-plan, in order to best assess a candidate using their non-verbal cues.

To assess a candidate’s fit with company culture, high-performance trainer Mark Bowden advises setting up an “in-environment” interview, to best see how a person will assimilate to the organization’s culture.

“Are they sitting closer or farther away compared to how your colleagues sit amongst each other at the office,” said Bowden. “Look at the speed of your communications culture too – how fast do people in your organization speak, compared to the pace of your candidate.”

Bowden advises comparing a candidate’s non-verbal cues to the body language that you’ve seen among people you currently work with. “Use your gut feeling to read the signals you are getting, and then make an intelligent judgment through comparative contexts.”

Hoppe points out that it is very important to pay attention to people’s culture, as this can greatly influence our body language stereotypes. Consider eye contact. Many of us have been taught to look people in the eye. We’re told if they don’t look you in the eye, they must be lying. “In North America our gaze rate is about 70 per cent and we are considered average. There are also low gaze rates in cultures like the Japanese where it is considered rude to ‘stare’ for prolonged periods of time. Their gaze rate is 45-50 per cent,” explained Hoppe. “It would be a mistake to assume such a candidate is lying.”

“On the other end, Scandinavians have a high gaze rate of 90% when speaking, which doesn’t mean that they are staring you down or trying to be intimidating at all.”

In the same way, Hoppe explains, we might signal to a candidate with our forefinger to “come this way,” but in Singapore that would be considered extremely rude since that is how you would beckon a dog!

Nicholas Boothman, a leading expert in face-to-face communications says many companies’ best performers have what he calls the “five human super powers.”

“When you are reading a candidate’s body language, you want to look for: enthusiasm, curiosity, the ability to process feedback (do they respond?), empathy and imagination,” explained Boothman. “Zero in your questioning to see if all five of these super powers are working in the interview, if you do not see a glimpse of those five things, say: next!”

Julie Labrie is President of BlueSky Personnel Solutions. With over 20 years of recruiting top talent, she is a veteran in her field. Fluent in both English and French, Julie also provides bilingual placement and expertise. She works closely with both business/HR executives and job candidates, and can offer insights into the strategies, nuances and psychology of the hiring process.